A crew of students and faculty members from the D’Youville dietetics program once again hopped across the pond as part of the Food and Culture class offered each spring. This year, the group traveled to Cork, Ireland to explore that country's cuisine and discover its rich history.

While trekking across the area, the group attended lectures and visited several local farmers for tours.

Kathy Border EdD, assistant professor of dietetics, said the trip wasn’t to learn solely about the diet of Ireland. “We spent time learning about the efforts of farmers and producers to encourage people to eat close to the source of their food — something that is relatively new in Ireland,” she said.

A mural outside of the Ballimaloe Cookery School.

“Through our lectures we were able to gain a better understanding on how food produced in Ireland was used as a commodity for trade. Salted beef and butter was loaded onto ships in Cork Harbor to feed early explorers and merchants. We learned about events that led to the Irish famine in the mid-19th century which resulted in a mass migration of families. I felt such a connection to my ancestors who left County Offaly at the height of the famine and settled near Albany, New York!"

The group toured an authentic timber smoke house where the owner makes some of the finest, handmade smoked salmon in the world. Focusing on small batch production, the owner avoids automation where possible and has refined his rare traditional skills of hang-smoking for more than 35 years.

In Drimoleague, Cork County, the lush hills provide a rich and plentiful supply of nutritious grasses for the cows at Glenilen Farm. The cows grazing on the banks of the River Ilen then in turn produce a rich tasty milk which is used as a core ingredient in yogurt, cheesecakes, and butter. At the farm, the visiting D’Youville team even enjoyed a farm to table lunch.

Macroom Buffalo is home to Ireland’s first and only herd of milking water buffalo. The farm is owned by a husband and wife team who produce a variety of cheeses, including mozzarella, Greek-style salad cheese, and haloumi.

Trying new foods in different countries can be quite the experience, depending on how picky or adventurous of an eater you are.

“The black and white pudding was a traditional Irish course, especially at breakfast. I was not the biggest fan but it was something you needed to try if you went to Ireland,” said Kathy LaMarsh ‘21.

Black pudding is a type of blood sausage originating in the United Kingdom and Ireland.

Bacon and cabbage for lunch!

The group pictured outside the Ballymaloe Cookery School.

Everyone chopping onions for pea and coriander soup.

“They gave us a booklet of recipes to take home,” said LaMarsh. “I already made some of the recipes from the packet, including soup and hummus.”

Everyone needs some strawberry meringue for dessert.

Dominque Riforgiato ‘20 said she’ll be incorporating a lot of what she learned into her diet. “My diet has most definitely changed and I think that I’m much more aware of my consumption now and would like to reduce the amount of products I waste. Other than that, I’ll definitely use the recipes we had the opportunity to cook.”

Corned beef and cabbage with a parsley sauce at Farmgate Restaurant .

Danielle Couch ‘22 said she loved seeing the partnership that local farmers had with restaurants back in town.

“This relationship isn’t something I see a lot where I live. I wish I did. Because as a consumer I would know what I’m eating is local and fresh,” she said. “As an inspiring dietitian, I really enjoyed this idea of using fresh and local ingredients in meals.”

A vendor shows off his fish for purchase at a local market.

Couch also plans on having more of a farm to table experience back home. “One thing I plan on doing now that I am home is to visit local farmers markets like the one we visited, to buy more produce and other items from the farmers in my area,” she said.

Flowers for purchase at a local market.

One of the markets the group traipsed through was the English Market. Established in 1788, this year-round indoor market houses vendors selling local fresh meat, fish, cheese, produce, and baked goods. Its name is derived from the fact that the English ruled Cork City in the 18th century.

Tripe, an edible part of a cow's stomach, and drisheen, a type of blood pudding, at the English Market.

It’s always nice to pick up tips and tricks while traveling to new places, too — like where is the best spot to get fish and chips or your favorite breakfast? Trips to Cobh, Midleton and Dublin helped answer many of those questions.

Fish and chips in Cobh, a town located east of Cork.

Many of the chefs are very involved in the creation of their menus and dishes as the work to create a very seasonal experience for their guests.

“For our meal at Sage Midleton, the chef sourced foods no greater than 12 miles from the restaurant,” added Border.

When traveling abroad though, it’s important to know the traffic flow. “I could not get used to crossing the streets and knowing from which direction the traffic would be approaching,” said Eric Nowak ‘20.

Nowak, who also traveled to Crete, Greece last year, said he was excited to have the opportunity to visit a new country. “I had learned so much on my study abroad to Greece last year that I was stoked to learn more from a new culture,” he said.

Another important aspect of the study abroad experiences is the opportunity for the group to experience the culture of their host city or country. Every so often it’s good to experience typical “touristy” attractions, like seeing the Blarney Stone and the Cliffs of Moher.

“The culture of Ireland focuses around a lot of traditions such as foods and music. It was so cool to go into a pub or restaurant and to hear the variety of music the bands or bar played,” said Couch.

The group poses at The Brazen Head Irish Pub in Dublin.

“Honestly the touristy parts were amazing as well,” added LaMarsh. “I'm not sure when I will have the chance to return again, so I had to go to the Cliffs of Moher and kiss the Blarney Stone!”

The group poses at the Cliffs of Moher, located at the southwestern edge of the Burren region in County Clare, Ireland.

Getting close to the edge!

Blarney Castle is a medieval stronghold in Blarney, near Cork, Ireland.

The Blarney Castle Gardens offer a picturesque walk around the grounds.

Many students might be on the fence about heading abroad as part of their program. Riforgiato has some straight forward advice.

“Do it,” she says. “Even if it’s only for a matter of a few weeks or days because it really is life changing to see what other people are like in another culture. It opens your eyes, and it shows you just more things you may have never realized before. I was so scared, but it was totally worth it. It was amazing. Truly and utterly amazing.”

Speaking on their favorite part of the trip, the group had plenty to share.

Couch: "My favorite part of the trip was just to explore the country. It was so fascinating to experience the culture of Ireland and learn so much that I can use in my career as a dietitian."

LaMarsh: "I became closer with my fellow dietitian majors, learned about a great new culture, and now I have great stories and memories to share."

Riforgiato: “The coolest part of the trip was seeing the similarities and differences between our society and theirs. To interact with other kids our age or adults our parents ages and see what their opinions and feels where compared to our own, in addition to their views on sustainability. It was amazing to see how much care some of the farmers seemed to have toward their animals and the overall reduction of waste they had. So many people seemed to be highly supportive of not wasting products. I guess in short it was really just their overall mindset.

Nowak: “[The coolest part of the trip was] the comradery, the landscape, their diet, the history, and the Guinness.”

See the full Flickr album from the group's visit to Ireland here. 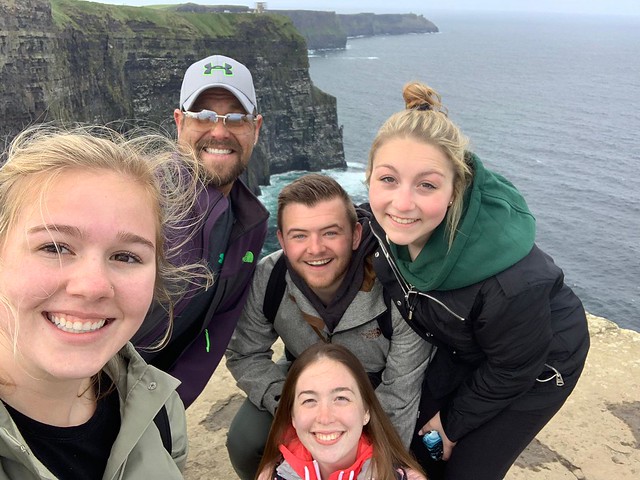